Overview of Alcohol Consumption
People drink to socialize, celebrate, and relax. Alcohol often has a strong effect on people – and throughout history, we’ve struggled to understand and manage alcohol’s power. Why does alcohol cause us to act and feel differently? How much is too much? Why do some people become addicted while others do not?
At the National Institute on Alcohol Abuse and Alcoholism (NIAAA), the answers to these and many other questions about alcohol are constantly researching. Here’s what the NIAAA knows:
Alcohol’s effects vary from person to person, depending on a variety of factors, including:     While drinking alcohol is itself not necessarily a problem – drinking too much can cause a range of consequences, and increase your risk for a variety of problems.

Consequences of drinking too much
Alcohol enters your bloodstream as soon as you take your first sip. Alcohol’s immediate effects can appear within about 10 minutes. As you drink, you increase your blood alcohol concentration (BAC) level, which is the amount of alcohol present in your bloodstream. The higher your BAC, the more impaired you become by alcohol’s effects. These effects can include:     Other risks of drinking can include:     People who drink too much over a long period of time may experience alcohol’s longer-term effects, which can include:
Alcohol use disorder
Health problems
Increased risk for certain cancers
In addition, long-term alcohol use disorder may result in Wernicke-Korsakoff syndrome, a brain disorder due to thiamine (vitamin B1) deficiency. Lack of vitamin B1 is common in people with alcohol use disorder. For more information visit MedlinePlus.

Alcohol's Effects on the Body
Drinking too much – on a single occasion or over time – can take a serious toll on your health. Here’s how alcohol can affect your body:

Brain:
Alcohol interferes with the brain’s communication pathways, and can affect the way the brain looks and works. These disruptions can change mood and behavior, and make it harder to think clearly and move with coordination.

Heart:
Drinking a lot over a long time or too much on a single occasion can damage the heart, causing problems including:     Research also shows that drinking moderate amounts of alcohol may protect healthy adults from developing coronary heart disease.

Liver:
Heavy drinking takes a toll on the liver, and can lead to a variety of problems and liver inflammations including: Pancreas:
Alcohol causes the pancreas to produce toxic substances that can eventually lead to pancreatitis, a dangerous inflammation and swelling of the blood vessels in the pancreas that prevents proper digestion.

Cancer:
Drinking too much alcohol can increase your risk of developing certain cancers, including cancers of the: Immune System:
Drinking too much can weaken your immune system, making your body a much easier target for disease. Chronic drinkers are more liable to contract diseases like pneumonia and tuberculosis than people who do not drink too much. Drinking a lot on a single occasion slows your body’s ability to ward off infections – even up to 24 hours after getting drunk.

Alcohol Use Disorder (AUD)
Problem drinking that becomes severe is given the medical diagnosis of “alcohol use disorder” or AUD. Approximately 7.2 percent or 17 million adults in the United States ages 18 and older had an AUD in 2012. This includes 11.2 million men and 5.7 million women. Adolescents can be diagnosed with an AUD as well, and in 2012, an estimated 855,000 adolescents ages 12–17 had an AUD.
To be diagnosed with an AUD, individuals must meet certain criteria outlined in the Diagnostic and Statistical Manual of Mental Disorders (DSM). Under DSM–5, the current version of the DSM, anyone meeting any two of the 11 criteria during the same 12-month period receives a diagnosis of AUD. The severity of an AUD—mild, moderate, or severe—is based on the number of criteria met.
To assess whether you or loved one may have an AUD, here are some questions to ask. In the past year, have you:     If you have any of these symptoms, your drinking may already be a cause for concern. The more symptoms you have, the more urgent the need for change. A health professional can conduct a formal assessment of your symptoms to see if an alcohol use disorder is present.
However severe the problem may seem, most people with an alcohol use disorder can benefit from treatment. Unfortunately, only of a fraction of people who could benefit from treatment receive help. In 2012, for example, 1.4 million adults received treatment for an AUD at a specialized facility (8.4 percent of adults in need). This included 416,000 women (7.3 percent of women in need) and 1.0 million men (8.9 percent of men in need).
Ultimately, receiving treatment can improve an individual’s chances of success in overcoming an AUD. Talk with your doctor to determine the best course of action for you and see Rethinking Drinking and Treatment for Alcohol Problems: Finding and Getting Help for more information. 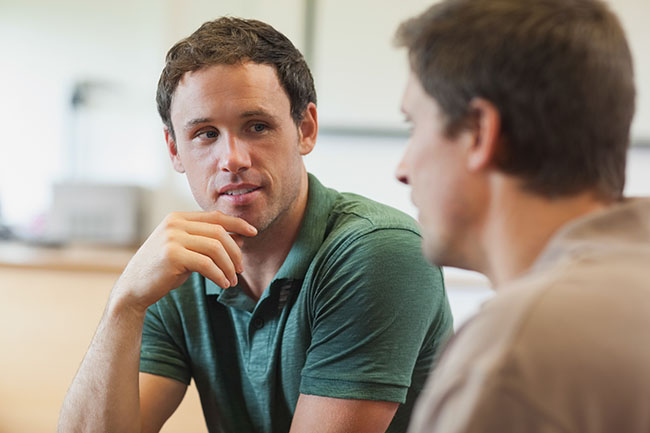 "I love the support I got from the staff at Visions, they really care." - Former Client